Japan: Why Paul Krugman doesn’t get it right and Martin Wolf has to move on

With Abenomics (the economic approach of the new Prime Minister Abe) at full speed, Japan has a comeback as a challenging case at the global stage and many take a closer look. Last week, Paul Krugman as well as Martin Wolf in the Financial Times have been trying to justify what is criticized by many as a new and irresponsible spending spree. No doubt, Abenomics is a well intended exercise and should be applauded by reasonable people all around the world, in particular in those circles where austerity mongers are still hoping to find someone out there who could import a bit more and absorb their own exports.

However, even well-intended policies may lead to questionable results if the underlying analysis is flawed. Abenomics and most of its academic followers like Paul Krugman regard a protracted liquidity trap as the main reason for the Japanese weakness. Martin Wolf departs from that but remains within the financial flow framework, which does not allow him to make the crucial point although he mentions it in passing.

The purpose of Abenomics is undeniable. Despite the highest public debt level in the world, the Japanese government has decided to stimulate the domestic economy because there is a real danger of falling back into recession. Given this, any kind of long term justification for the weakness like an ageing population is beside the point that has to be made now. Ageing population or not, if an economy, after a deep recession, is not able to return to recovery mode without renewed stimulus something fundamental must be wrong.

Krugman’s liquidity trap story is unconvincing because it lacks a clear and consistent inflation theory. Inflation is considered to be a monetary phenomenon. But it is hard to understand that even extreme monetary easing plus many attempts of fiscal expansion over the last twenty years have not brought about any inflationary acceleration, in particular if, according to Krugman, the growth performance is found to be rather normal. It seems that the old monetarist ideas about inflation stand in the way of a clear and practical solution. Imagine a world were money is much less important for prices than wages.

Nominal wages (compensation of employees) have been falling in absolute terms most of the time in Japan since 1998 (chart ULC and wages) and have found their way back above the zero line only recently but with growth rates below one percent. Unit labour costs (compensation per head divided by Gross domestic product per head), clearly the best predictor of inflation in all developed countries of the world including Japan (chart ULC and inflation), have been falling consistently since the mid of the 1990s. They were above zero only in years of sharp downswings of the economy and falling productivity. Real wages were on a random walk below and above zero with the latter associated with periods of absolutely falling prices and increased uncertainty. 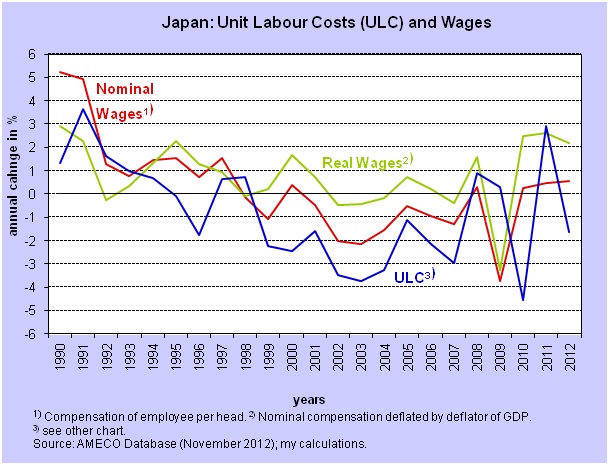 Considering the non-monetarist inflation theories of demand pull and cost push it is obvious that against the deflationary forces of falling cost levels for the overall economy and sluggish demand from consumers monetary policy is powerless. The diminished expectations and the uncertainty of Japanese private households concerning their future income and deflation as such prevent private consumption from taking a lead role in a recovery. To call that constellation a liquidity trap is misleading.

In fact, the trap is a wage or income trap much more than a liquidity trap. And exactly at this point the Japanese story turns into a more general story of the dangers of overly flexible labour markets that applies to the US after the crisis of 2008 as well as to large parts of Europe. The walk into that trap is usually triggered by sharply rising unemployment that is unrelated to specific labour market developments like wages rising too much. High unemployment as the result of a financial crisis, for example, is the scenario for pressure on wages and mass incomes even if wages and incomes were depressed already before the occurrence of the crisis. High unemployment and workers trying to price themselves flexibly back into the markets, as the OECD had once called it (UNCTAD, Trade and Development Report 2012), create the perfect storm for economic policy.

Monetary policy is restricted by the zero bound for interest rates and fiscal policy would need to implement a huge stimulation programme to overcome the reluctance of consumers to spend in face of their uncertain outlook on jobs and on wages. Hence, in the US today as in Europe investment is restricted by demand and demand is restricted by income expectations of private households at very high levels of unemployment. At no point is it a story of the “willingness” to save or to invest “at full employment” as Krugman holds (and with given income or income growth at full employment, as he should have added). It is a story of a dysfunctional labour market, where unemployment can rise sharply without wages being “too high”. And the lesson is that without fully discarding both, the monetarist inflation theory and the neoclassical labour market theory, there is no consistent critical theory of economics.

Martin Wolf (in the FT of February 6) senses that the story is more subtle and insists that the huge retained earnings of companies have to be lowered without damaging investment. And he even hints to raising wages as a means to rebalance a totally unbalanced economy. But he is shying away from explicitly naming the core of the trouble: a labour market closely attached to the growth performance of the economy (UNCTAD, Trade and Development Report 2010) – as demand of workers is the most important determinant of growth in closed economies – and unjustified pressure on wages in a world where a crisis originating in the financial sector can bring about huge spikes in unemployment.

Let’s look at another big country to clarify my point. The United States are struggling to get out of the recession for exactly the same reason. Low wage shares and a long history of middle class workers falling behind coincides since 2008 with a dramatic rise in unemployment. Clearly, the power in the labour markets shifts towards employers but for no good reason. The power shift would be justified if it would help to balance a shift in the other direction before. But that is not the case. Hence, high unemployment depresses wages, depressed wages depress private consumption and depressed consumption does not allow the economy to recover despite enormous profits in the company sector and desperate attempts of monetary policy. The only way out without resorting to unconventional instruments like income policies would be the direct improvement of the labour market conditions by an incredibly huge fiscal stimulus – but that is blocked for political reasons.

Indeed, it is a global disease. Large parts of Europe are heavily infected. In the troubled regions of the European Monetary Union (EMU) extremely high unemployment meets with severe absolute cuts in mass income. But instead of healing the sickness of unemployment, falling mass income depresses domestic demand and increases unemployment further. Clearly, the labour market cure is destabilizing the overall economy wherever domestic demand is more important than external demand. This applies to all the Southern European countries including France.

The traditional way to get round the brutal logic of destabilizing labour markets is to hope for improved competitiveness of the economy as a whole and more exports (or less imports). Indeed, if a wage cut quantitatively stimulates foreign demand more than it depresses domestic demand, a solution seems to be found. This explains a paradox case like Ireland. With an export share beyond one hundred percent of GDP, the positive export and import effects of the wage cuts have balanced out the negative domestic demand effects.

However, we may wish but we cannot be all net exporters as long as we have not found new galaxies that would be willing to accept current account deficits and the uncomfortable position as debtor. That is why the biggest country in EMU, Germany, faces now a problem similar to the one of Japan. With the highest current account surplus in the world, ailing European partner countries  and few willing deficit and debtor candidates around in the rest of the world, its mercantilist approach has hit the wall.

Due to many years of wages lagging behind productivity Germany has the lowest wage share in after war history but persistent net savings of private households. Germany recently enshrined a debt break for the government in its constitution. The company sector is sitting on enormous amounts of profits (is a net saver also) due to the export bonanza of the last decade, but domestic investment that would correspond to the domestic net savings is nowhere in the air.

In Germany, as in Japan, the way out without taking on new government debt is to get the company sector to accept its role of being the natural counterpart of high private net savings. Thus, economic policy has to intervene to help increasing wages and raise corporate taxes. The result should be higher investment and not less. That may sound perplexing and paradox, but wait a moment. This kind of macroeconomic logic (or macroeconomic bookkeeping if you want) is irrefutable: if big countries like Japan and Germany do not find more and bigger debtors in the rest of the world their way of running their economies is illogical and will lead to collapse sooner or later. If government debt is considered to be unsound and to be kept in check, the company sector, as has been in most decades after the Second World War, has to be the net debtor and the main investor at the same time.

We are all Japanese now. The times where companies are sitting on huge amounts of idle cash and engage in wealth management has to come to an end. Economic policy still is able to accomplish the change by its own action. However, the signs on the horizon do not yet signal a turning point. It is just the other way round, the looming fight is about international market shares and competitive depreciation. That is exactly the way in which the world will fail to come to grips with the power of an overly rich company sector. The history of another post crisis period has to teach an important lesson here.