Inflation differentials: Mario Draghi does not explain them, and the European Parliament does not ask him

In September 2014 Mario Draghi had one of his regular meetings with the European Parliament’s Committee on Economic and Monetary Affairs. He explained the European Central Bank’s (ECB) policy and answered questions. At the end of his introductory statement there was an interesting remark:

„Originally, you had also chosen ‘inflation differentials in the euro area’ as one of the topics of today’s hearing. I hope you will understand that, given the important decisions we took in July and September, I have focused my remarks on our monetary policy measures.“

While I would have wished to hear more about Mario Draghi’s view on the topic, apparently none of the committee members wanted to know. When discussing current economic policies with Mario Draghi after the introductory statement nobody mentioned inflation differentials.

This may partly be due to the fact that the committee had invited experts to discuss the matter before meeting the ECB’s president. Karl Whelan from University College Dublin, one of these experts, resorted to intra-EMU financial flows and current account balances to explain inflation differentials: „It was these imbalances – aggregate demand fuelled by cheap credit – that were responsible for the higher rates of inflation in countries such as Ireland and Spain“. A paper by Zsolt Darvas and Guntram Wolff (Bruegel) also mentions „credit developments fuelled by low real interest rates“ as a reason for inflation differentials (a sentence which in my eyes creates more confusion than clarity since inflation rates are used to calculate real interest rates, and this results in a strange form of circular reasoning). They continue to discuss this phenomenon which in their view may „reflect normal adjustment processes“ or „the different cyclical position of regions“.

Anne Sibert from Birbeck, University of London, lists 8 reasons or causes for inflation differentials in her contribution, among them different measurement methods, differences of consumption-structure and real-growth differences.

All authors agree there is little the ECB can do about inflation differentials since its main policy tool – setting interest rates – is aimed at all EMU countries without distinction. This is indeed plausible, but I found the discussion of intra-EMU inflation rate differentials to omit an important variable.

As we have discussed on this website before there is a remarkable shyness among politicians as well as in the scientific community to discuss wage policy as a tool to influence economic development. To be precise we note a highly asymmetric approach: It is very common to discuss or install wage restraint or even wage reduction, although politicians prefer to avoid the term wage policy. Lately „structural reforms“ has been much more popular when in fact wage restraint is meant. On the other side of this asymmetry there are only few people who want to discuss a preferred positive rate of development in hourly wages.

I am coming back to the omitted variable in explaining inflation differentials. Heiner Flassbeck and Friederike Spiecker, the main contributors to this website, have previously looked at the correlation between unit labour costs (ULC) and a broad measure of inflation (the GDP deflator). This correlation is close to 1 when looking at the cumulative development of both variables for a number of years in different countries: 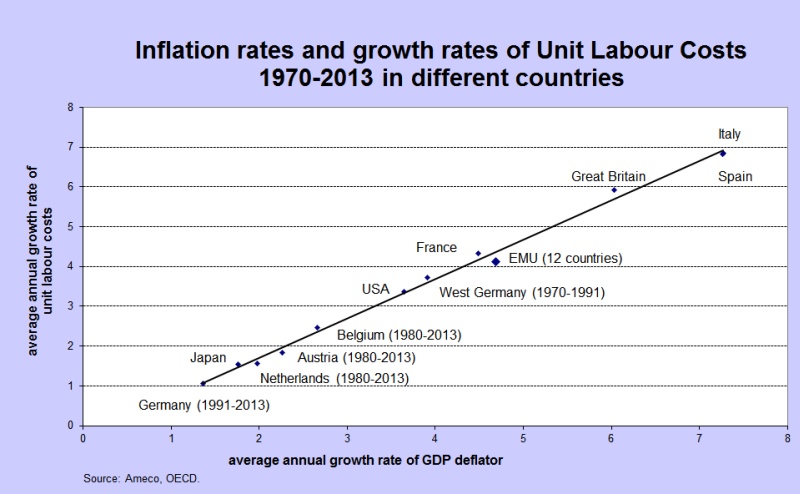 Of course correlation is not causation, and we will postpone the discussion of why we believe there is a causal relationship from wages to inflation (and not vice versa) to a later article.

But it is even more interesting to look at this wage-price relationship in the shorter run. If we find such a relationship between wages and prices also in the short to medium term, much more attention should be paid to wage policy as a means to attain certain inflation levels in different countries of the Euro area. 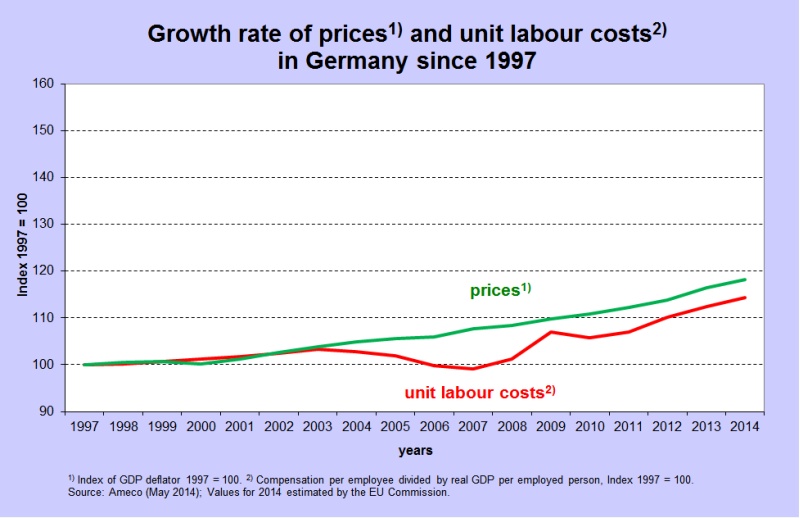 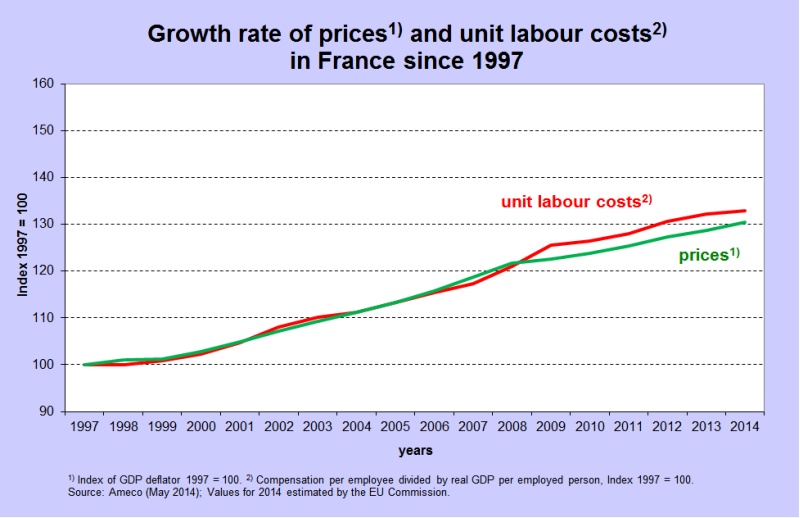 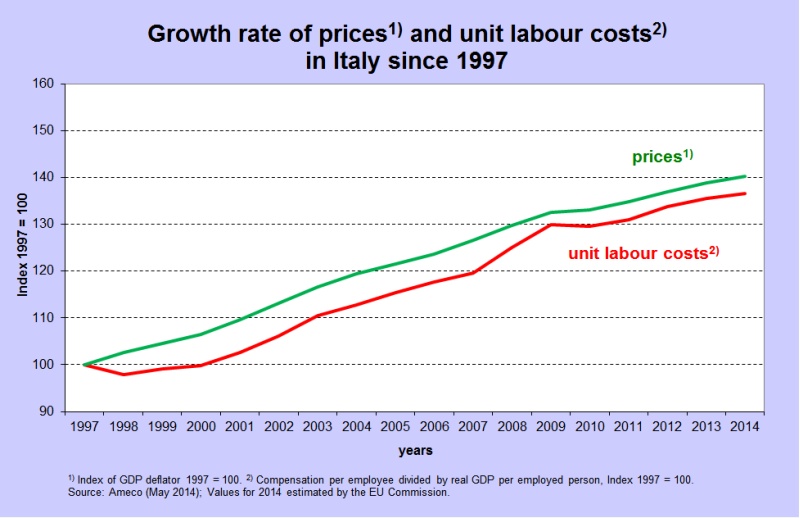 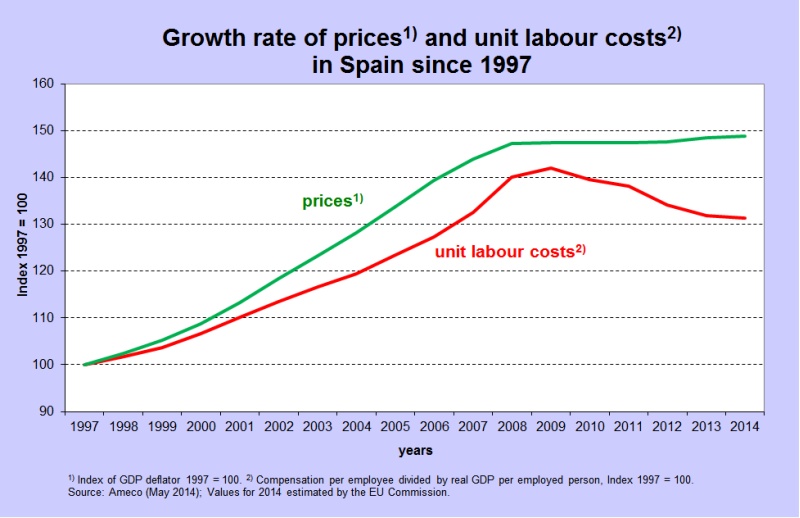 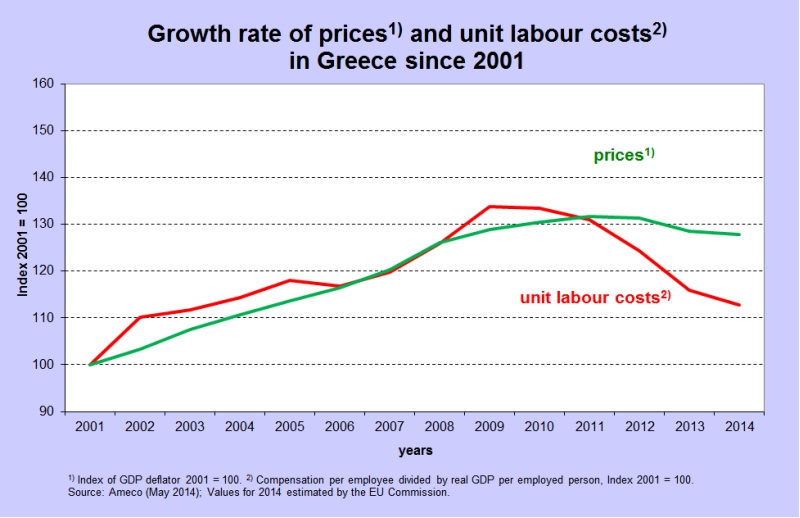 As one can easily see the relationship between ULC and inflation rates is rather close in each country, albeit to a different degree in different countries. And we can see this relationship also holds in the short to medium term.

These figures also show how substantial differences in price levels between EMU member states accumulated since 1997, the year after which no more exchange rate changes occured between these countries (Greece since 2001).

On the one hand this explains much of the current account deficits and surpluses within the EMU (third market effects included). We view the price level as a main factor of competitiveness in international trade (assuming that quality differences do not change that much over time or are incorporated in prices as they should be).

On the other hand it is plausible that bringing prices in Southern Europe to a German level requires a deflationary process. This deflationary process in turn severely dampens domestic economic activity in the countries affected. It would be much easier to handle this adjustment if Germany accepted and aimed for a higher dynamic of domestic ULC growth. Of course politics cannot and should not interfere with each and every wage bargaining process in the economy. But the federal government in Germany could at least set a sensible rule when increasing the minimum wage every year. And it could give a similar kind of wage guidance for the rest of the economy by increasing civil servant’s pay decently.

To sum it up this recipe is what Mario Draghi’s ECB should seriously consider. It is high time to give up on the creed according to which wages are and must always be a „market result“. No, wages und more precisely unit labour costs should be monitored closely by the European Central Bank in each EMU country. This is necessary to give a clear guidance which wage development is needed to both get out of the deflationary trap which threatens to choke our economies in Europe and at the same time rebalance international trade.