Greece has voted, but is there a choice for the new government?

This is the (updated) translation of an article that was issued January 25, 2015 on flassbeck-economics. We intend to publish one article in English every week to allow more readers to follow closely our analysis of global and European events.

The people of the oldest democracy in the world have finally spoken. The Greeks want to radically change the economic and political course of their country. Now that SYRIZA has the majority, the stage is set for policies that effectively dismantle restrictions in public expenditure, wage and pension cuts, hasty privatisations and much more. The question now is how these new policies can become reality. The old policies, which failed completely, were part and parcel of formal agreements between the Greek government, the Troika and the international creditors. Can the new government change course and, if so, how?

It is extremely unlikely that the members of the Troika will change their minds and agree to a fundamental change. The experience of the last forty years of creditors‘ domination by the International Monetary Fund (IMF) around the world proves that no one in Washington and in the developed countries that support IMF policies cares about democracy if it has to adopt a so-called structural reform program. Many people in Europe do not understand this sufficiently well. When a country requests help from creditor countries and the IMF it loses its sovereignty. It is the IMF and in the case of Greece the Troika that tells the politicians of the country what they can and what they cannot do.

There is no reason to expect it will be different this time. The representatives of the creditors, first and foremost the German Finance Minister, expressed the familiar view even before the elections in Greece took place. Regardless of who wins, Mr. Schäuble said at the World Economic Forum in Davos, Greece must honour their agreements and continue their efforts to improve their competitiveness.

Isn’t he right? Considering the actual performance of the Greek economy may lead to the inescapable conclusion that the Greek austerity efforts have been insufficient to satisfy its creditors? (see Figure 1). Labour costs have indeed fallen because of massive wage cuts. But in comparison to Germany Greece is nonetheless still far away from a position in which it can compete with the biggest country in Europe or regain lost ground vis-a-vis other European countries. 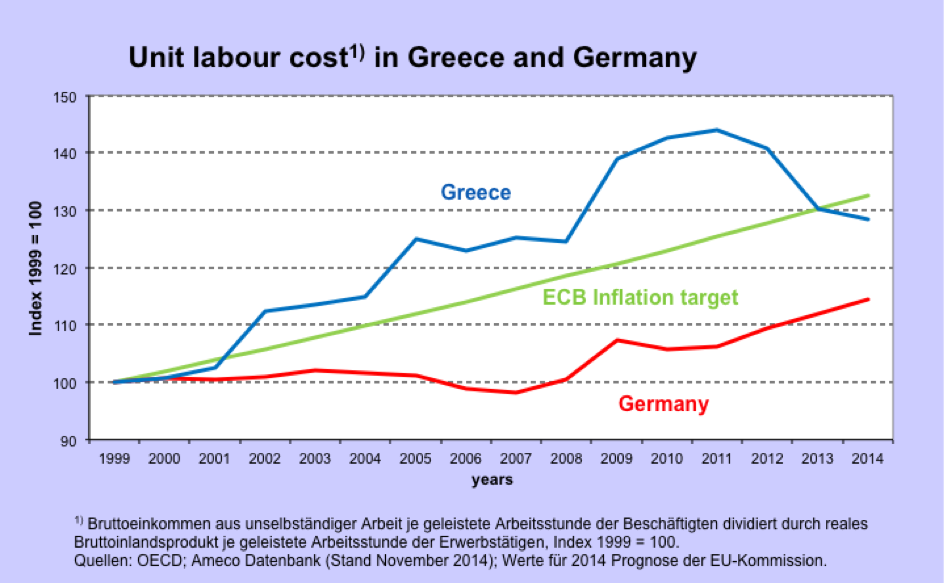 According to the dominant German narrative there is no alternative to the policies that the Troika imposes upon Greece. In this view, the Greek population wants to change course when only about half of the work required by the Troika has been done. Why this “impatience”? The German public and its leading politicians are not willing to realise the extent of the damage that austerity policies has caused in Greece up to now. To put it succinctly: Greece has gone through a Great Depression. Since the start of the crisis in 2008, real gross domestic product (GDP) fell by exactly as much as the United States GDP fell during the Great Depression in the 1930s. As a reminder, even today still, many economists are trying to work out how it was possible for such a blatant failure of economic policy to occur.

Greece lost a full 25 per cent of its GDP since 2009. No other European country ever faced such a manmade catastrophe in peacetime. Six years after adjustment policies came into place, the unemployment rate in Greece is 26 per cent and poverty has taken grip of large parts of the population. Unemployment has recently started to decrease somewhat, but not because growth prospects improve, but because many give up on the search for employment. At this moment of time there is no perspective for a recovery in the near future. Adjustment policies are necessarily painful, opined the German Finance minister in Davos. But what is their plan? Do they want Greece to go through another great depressions in the name of competitiveness? In view of what we heard after the election in the German media and from German politicians, it is not clear what the worst attribute of German politics at the moment might be, sheer stupidity or cold callousness. 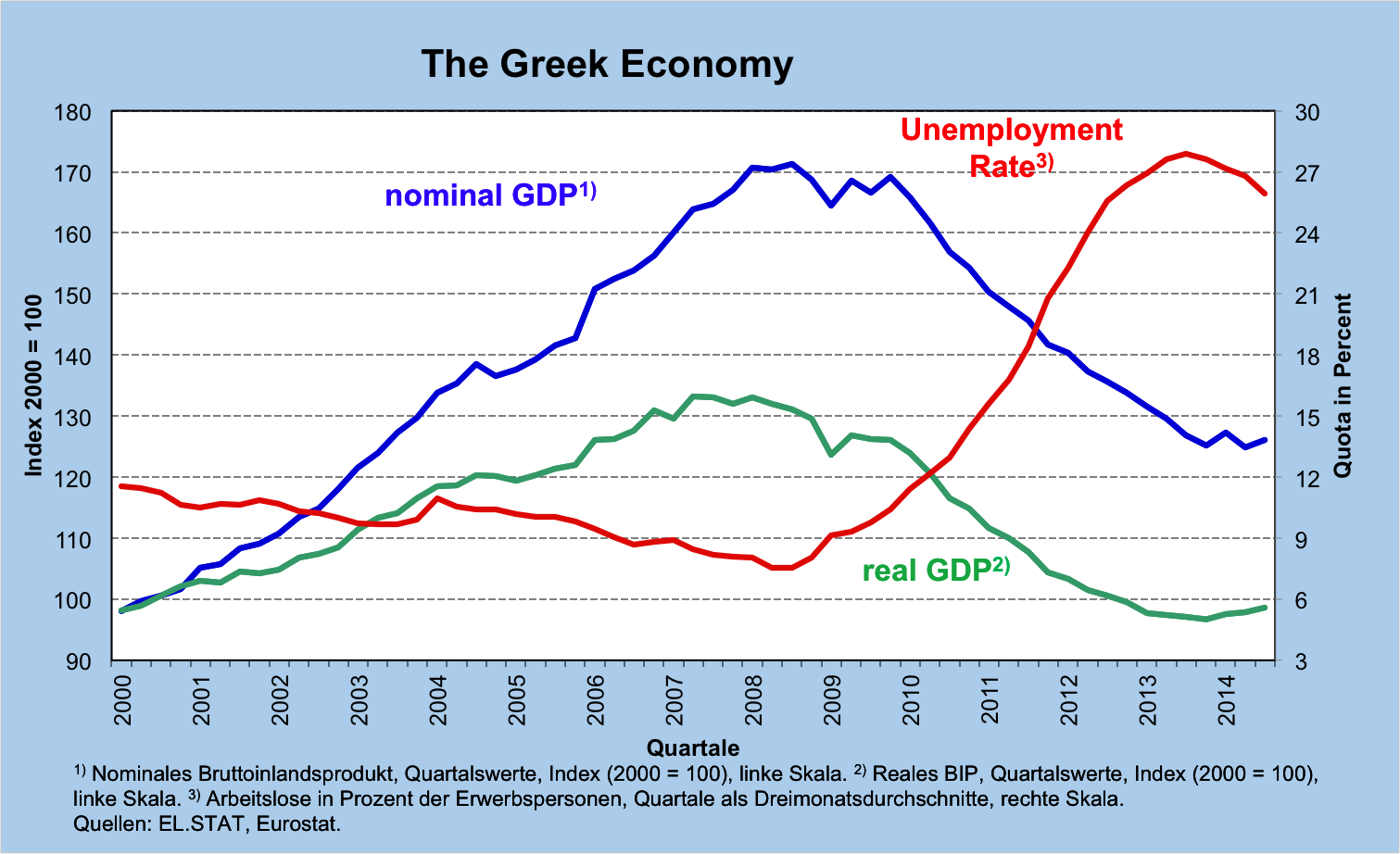 No, in fact, the new Greek government has no alternative than to oppose the policies for which there are supposedly no alternatives. Above all, it has to confront Germany. This is not impossible. In 2010, neither creditors nor debtors fully understood the destructive consequences of the TINA policy, which was imposed by the creditors and the Troika. This has now changed. France and Italy, which considered themselves on the winning side in 2010, have since then heard often enough that they belong on the other side. In Spain a strong left-wing party emerged. It is not unthinkable that Podemos will carry the next elections. Even the Troika, or, at least, the IMF and the European Central Bank, now understand that their ’no alternative policies‘ lead directly to deflation. The European Commission also changed its position. Ironically, it now argues in favour of ‚common sense‘ and takes the position that it can no longer allow the madness to continue.

Germany makes a grave mistake if it believes that Germany and some other Northern European countries will be able to prescribe neoliberal policies to the new Greek government as easily as they did in 2010. There will be a standoff. The result will be more even more destruction and more resentment towards Germany. German politicians would prove intelligence and vision if they would hold back instead of pouring yet more oil onto the fire. But there is little chance of that. The statements before the Greek election and after the victory of SYRIZA prove otherwise.