This is the translation of an article that was published April 24, 2015 on flassbeck-economics. We are publishing one article in English every week to allow more readers to follow closely our analysis of global and European events. However, translation is not free and we have to ask for a contribution from our English speaking readers also.

I have said a lot about Germany’s Finance Minister Wolfgang Schäuble and his economic world-view in the past and I do not feel like repeating myself because it is like criticising a student that is unwilling to learn and stubbornly continues to make the same mistakes. As for austerity and the ’structural reforms‘ that Schäuble defended once again in his article in The New York Times, Krugman already said everything there is to say about it.

So far, on his trip to the U.S., Schäuble has at least demonstrated on two occasions that he does not understand the basic logic behind a monetary union in general and the European monetary union in particular. We are not surprised and we are not the only ones. Most politicians of the Euro group do not know what Schäuble is really talking about when he criticises other countries. According to the EU Observer, he asked the Greeks why the country is still having a minimum wage that is higher than some other member states. He demanded to know why Greece has a higher ratio of civil servants to the population as a whole than any other member state. Such questions betray a fundamental lack of comprehension of what the problems really are. As I explained many times, such matters do not deal with the real question. It was never the idea that living conditions in the EU would even out across all member states. This is impossible and not even desirable. There would be rich and less rich countries. In a currency union it is important to align inflation rates and their most important determinant, unit labour costs – nothing else.

In a way, what Schäuble is telling the Greeks, although it is wrong, can still be understood because it is rooted in popular prejudice and he is, after all, a politician. But, as the Frankfurter Allgemeine reported, Schäuble goes further: he openly deplores that it is unfortunately impossible to force France into implementing labour market reforms of the kind that have been implemented in Spain. Schäuble’s views caused a political stir and widespread rejection in France, but what can the French do about it? It is my pleasure to make a suggestion.

It really is not necessary to spend a lot of words on this: let us look at some basic economic data and reach a conclusion. To begin with, up to the crisis of 2008, France’s growth was clearly superior to that of Germany. France growth has also been higher than Germany’s in the most recent years. 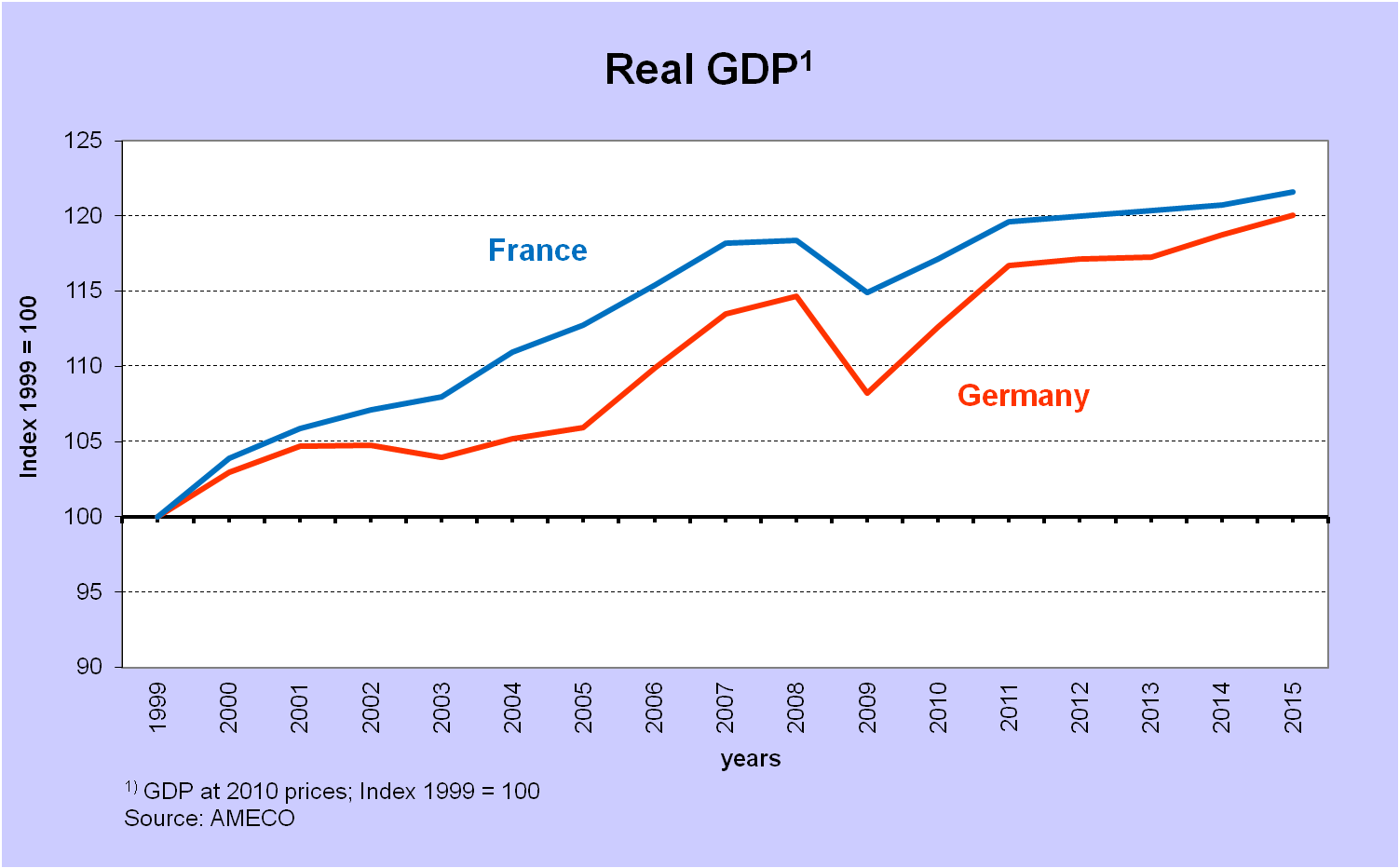 This is mainly because domestic demand in France is based on stable private consumption (see Figure 2). In Germany, on the other hand, private consumption grew much less, which is a direct result of the policy of low wages and its inevitable result: the plummeting of domestic aggregate demand. 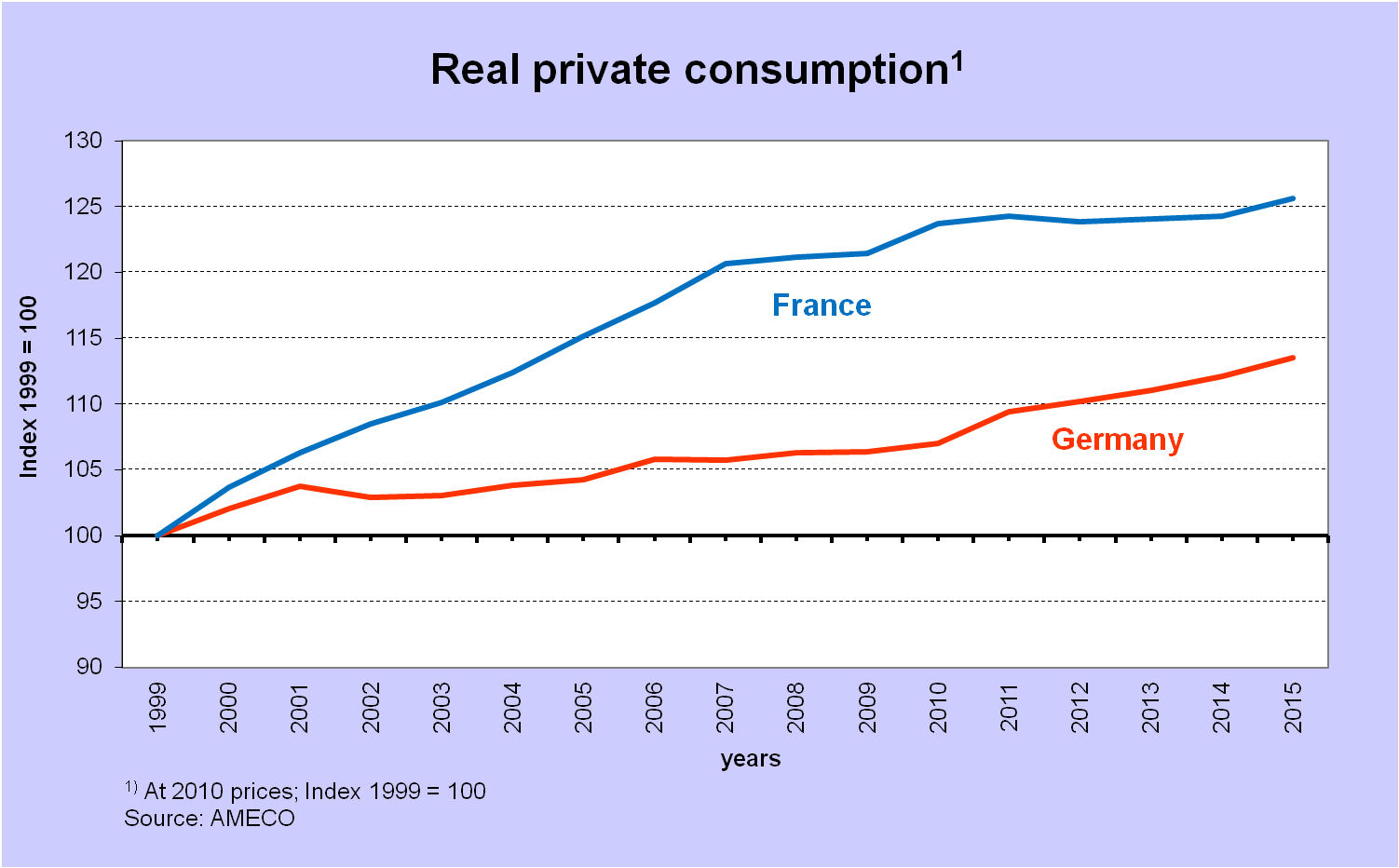 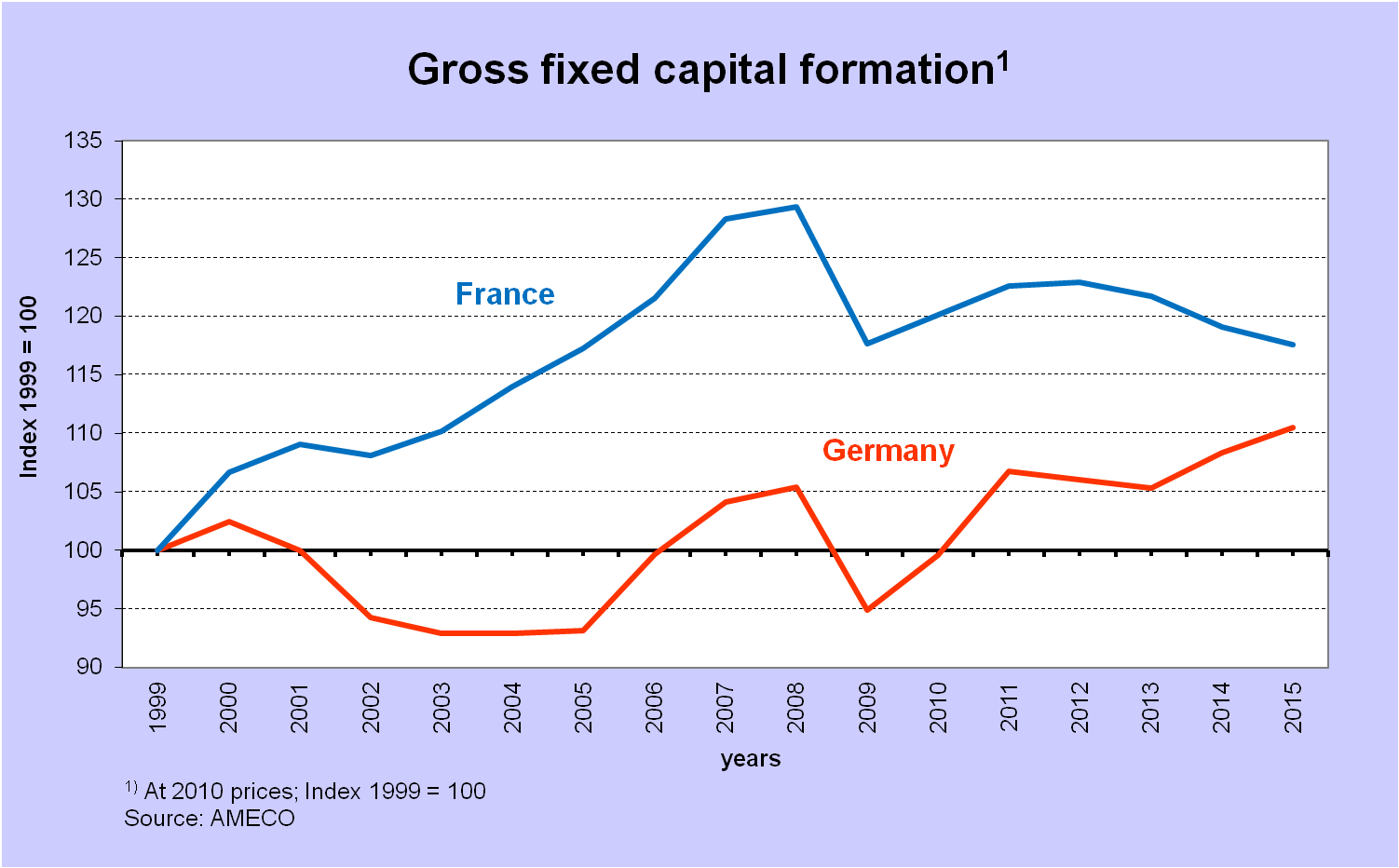 Then there is the productivity per hour. This is what really matters because it brings all relevant factors of an economy together in one number. Figure 4 shows that productivity per hour increased in France just as much as in Germany. There is hardly any difference. This seems to contradict the higher rate of investment in France at first sight. In fact, in absolute terms, French productivity is higher than German productivity (see below). The parallel development of productivity in France and Germany, despite weak investment in Germany, indicates that German workers have been squeezed more than their French counterparts: they work longer and for lower wages. This is of course not a sustainable course: you can squeeze your workers for some time, but you cannot squeeze them indefinitely.

Figure 4: Evolution of productivity per hour. 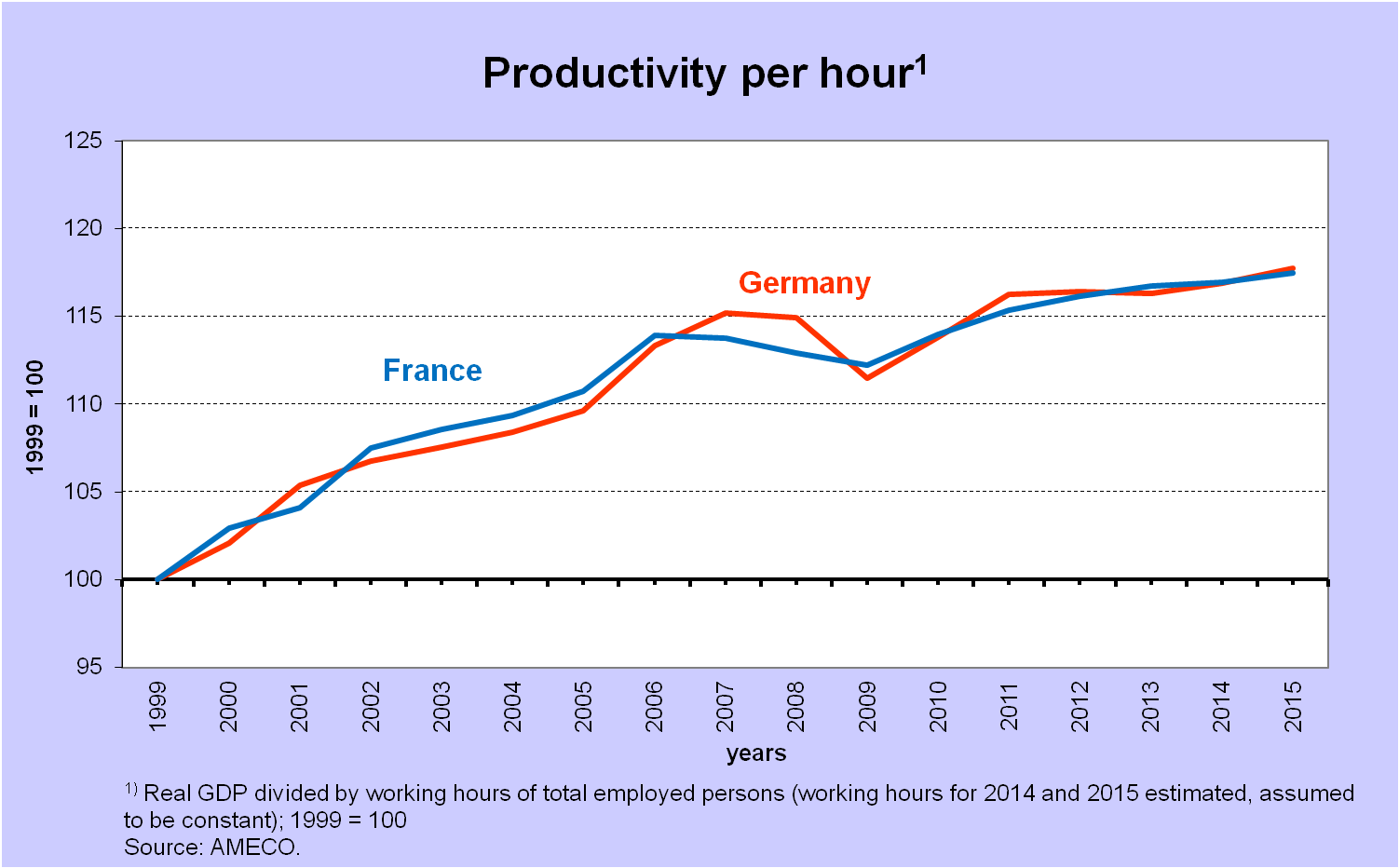 In absolute terms (again calculated per hour), French productivity is higher than German productivity (see Figures 5 and 6). This makes it crystal clear that Schäuble’s criticisms about the size of the French administration and French average working hours per week are misplaced. The relationship that Schäuble sees between these facts and the evolution of productivity is false. In fact, real wage rose in France in line with productivity, which is in complete accordance with the golden European wage rule. In other words, France perfectly played by the rules of the game, Germany did not.

Figure 5: Evolution of real wages and productivity in Germany. 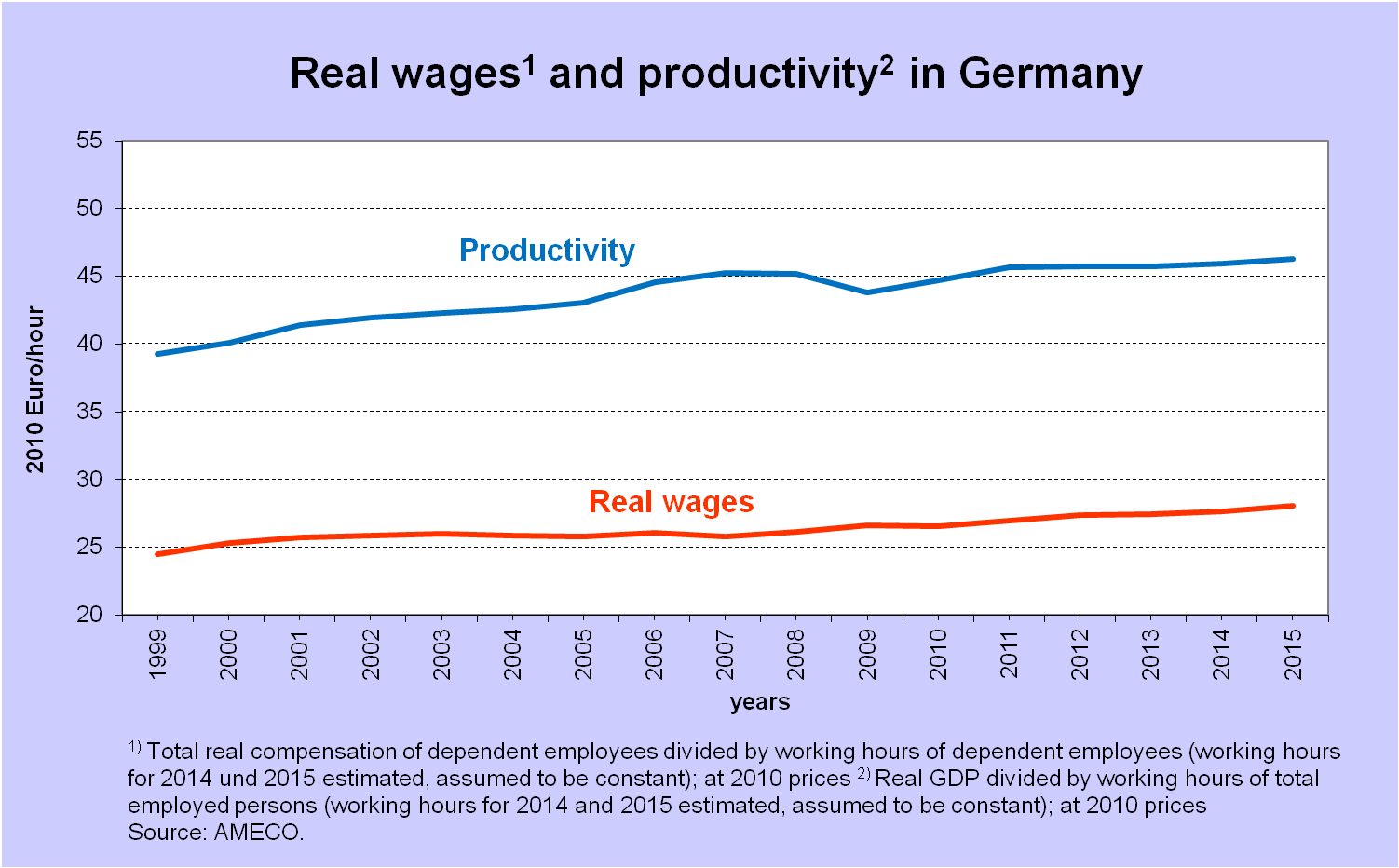 Figure 6: Evolution of real wages and productivity in France. 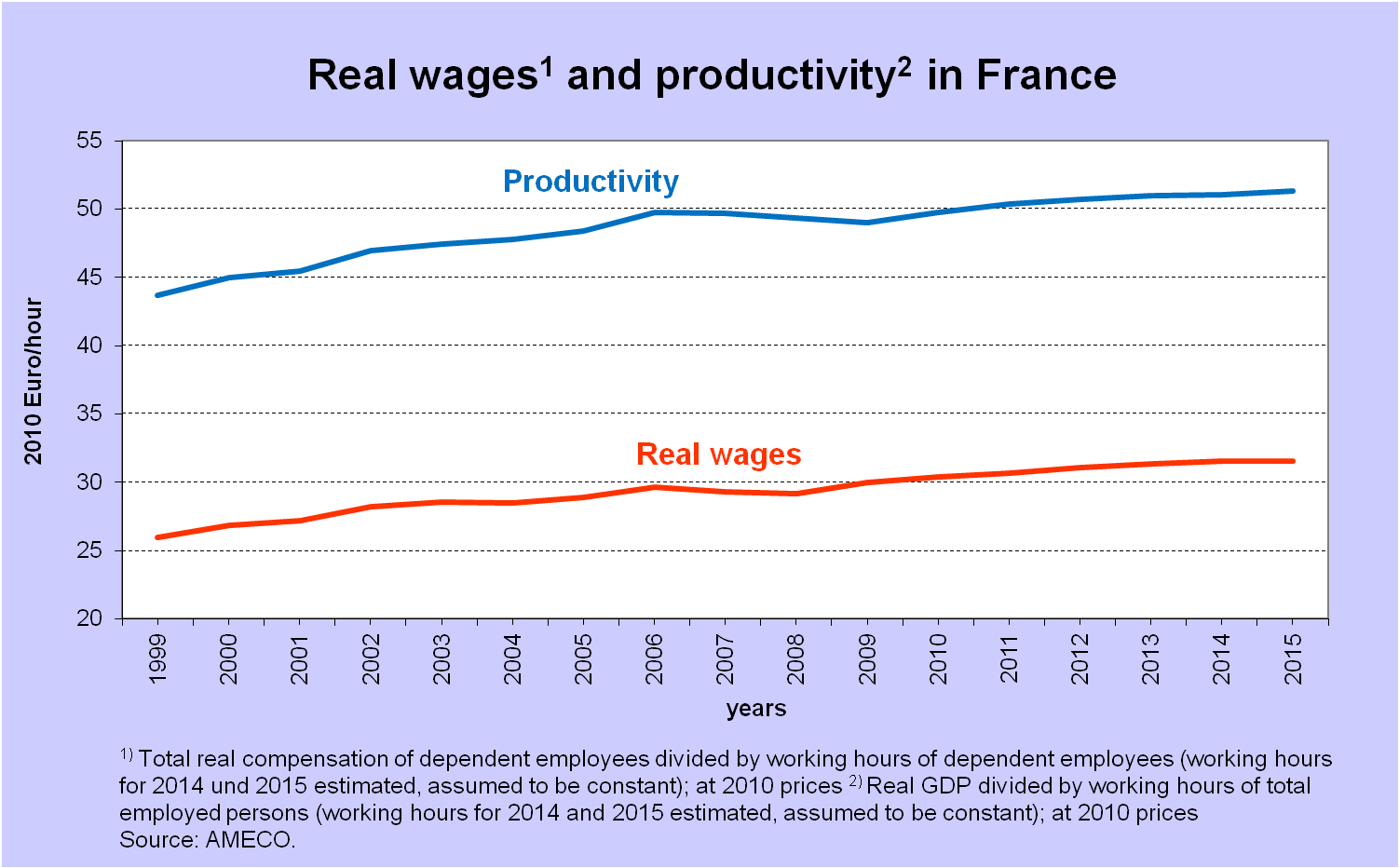 If all of this is true – and it is – why should France be forced to implement labour market reforms? I showed this many times in the past: France is an exception within the Euro zone in that its unit labour costs perfectly matched the inflation target of the ECB. In this, France did better than any other EU country, Germany included. France’s only major problem consists of having a neighbour, which, from the very beginning of the monetary union, decided to not abide to rules that are crucial to make the monetary union work.

Figure 7: Evolution of real wages and productivity in Germany. 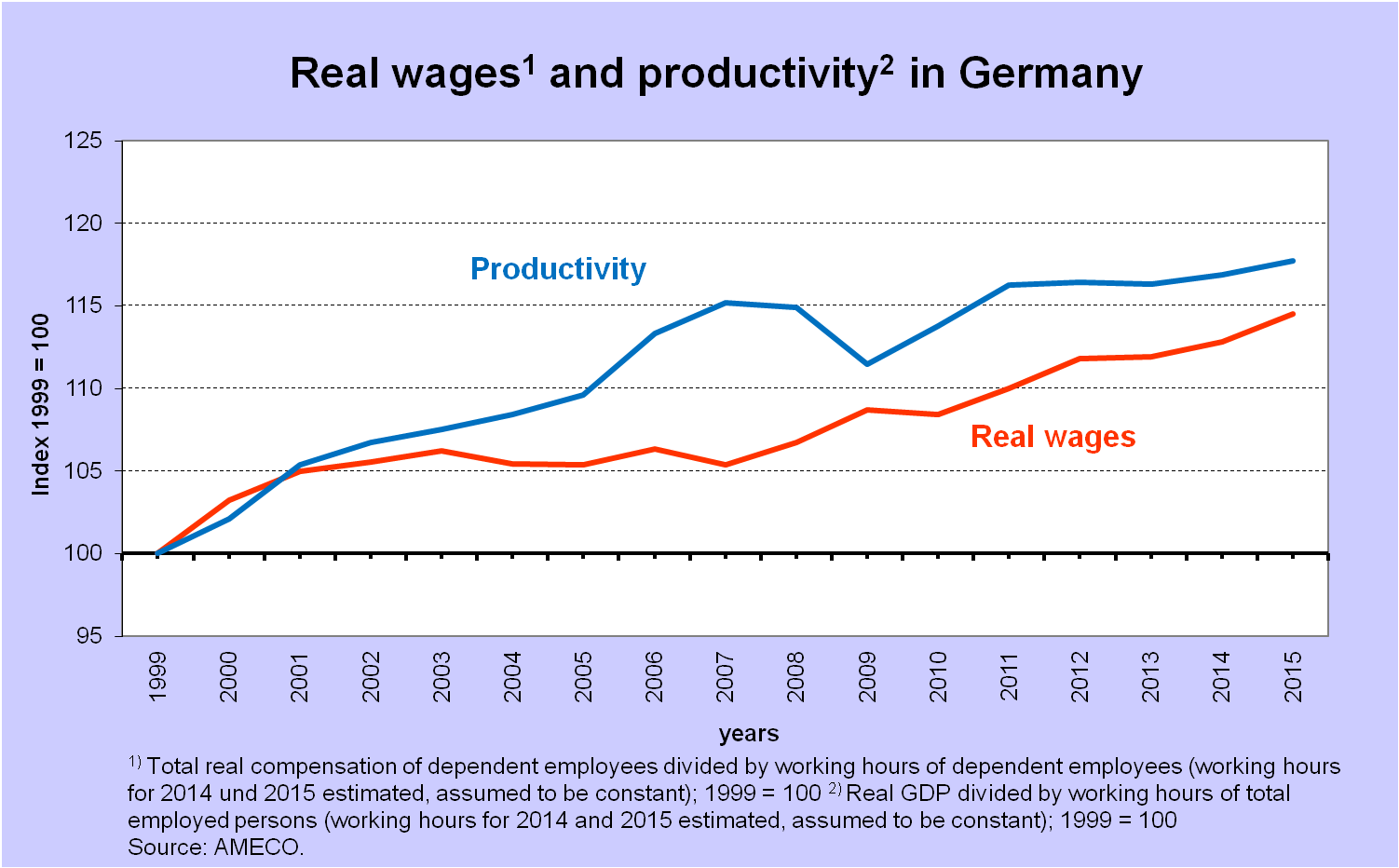 Figure 8: Evolution of real wages and productivity in France. 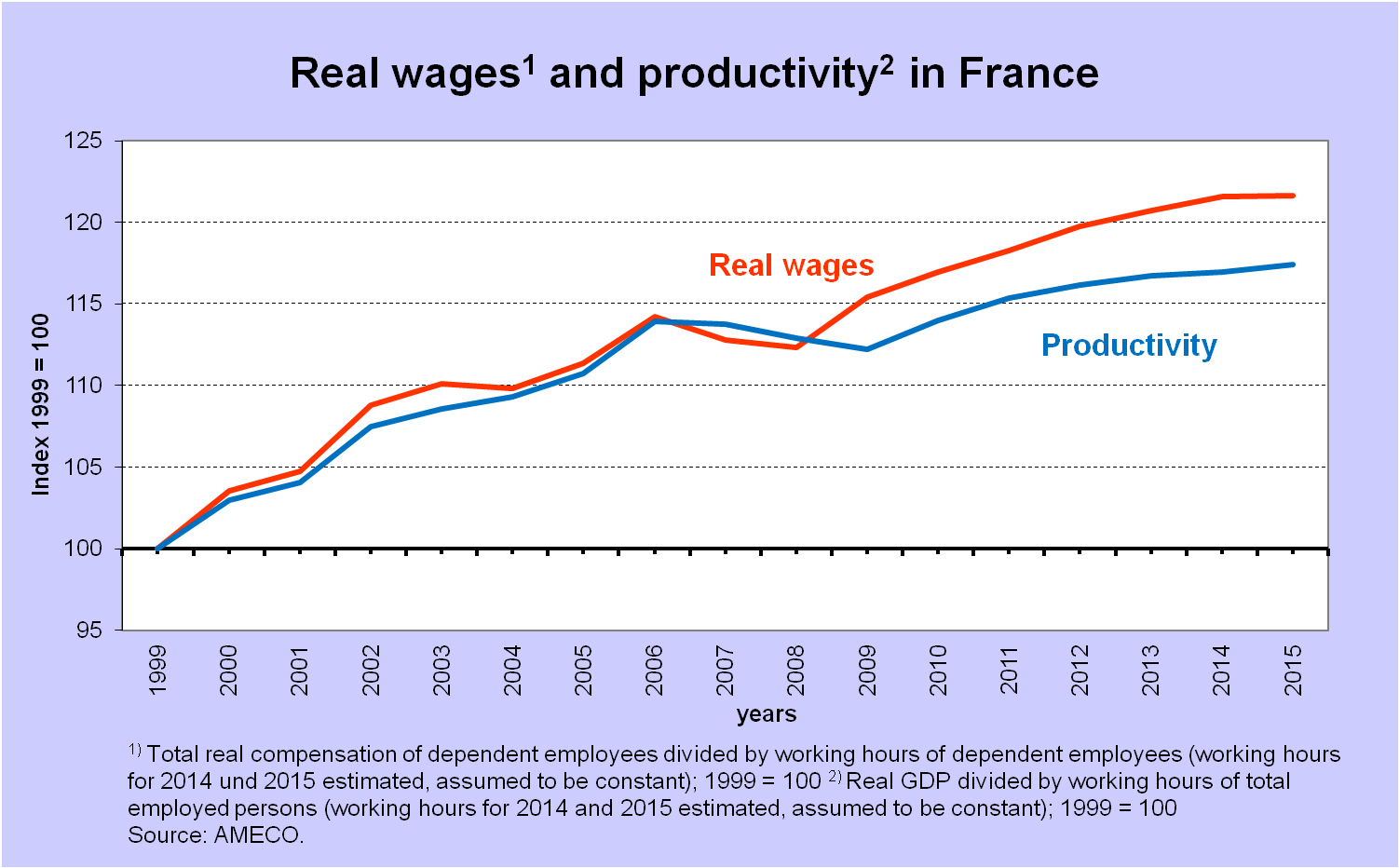 These figures highlight several things. Germany achieved its competitive edge not because of a more efficient economy, higher productivity and higher rates of investment, but from the squeezing of its work force and from the gradual dismantling of its welfare state. Unfortunately, the effects of wage restrains on competitiveness pay off – for the time being – because Germany gains political power from his position as a creditor that it safeguards by further accumulating trade surpluses.

In fact, France made the wrong policy choices. France would have done fine if it would have been able to adjust its currency when it was confronted with the aggressive German policies of lower wages and cheaper German products. The problem is, of course, that this impossible within the monetary union. The only way for France to keep pace with Germany’s devastating policies was to follow suit by putting equal pressure on wages in France. And what would have been the result? The result would have been the same as in Germany: a starving domestic economy whose cheap exports create deflation everywhere in Europe today (and even outside Europe). France would have ended up in a world of trouble – ten years earlier than now.

The crucial difference with the present situation would have been that Germany would not have been able to export its unemployment to other countries if France and others, from the very start of the EMU, had followed the German strategy. In this case, despite its counterproductive economic results, it would have been impossible for the Germans to lecture their EMU partners on sound economics today. Germany would not enjoy nearly the same dominant position as it has nowadays. Its economic power and its position as a creditor would not have bought it the same hegemonic political power.

Of course, all these considerations about what could have happened and what should have been done do not help one bit today. The train has left for the French. But there is an alternative to being overrun by Mr. Schäuble’s nonsensical teachings. The French should seriously consider it. It may be unconventional and seem unrealistic. On the other hand, no one can say that current circumstances can be called normal by any stretch of the imagination.

The French may, for example, consider to raise custom duties on German products. The value of the duties would reflect the difference in the increases of labour unit cost between 1999 to 2014 – in other words, it would reflect German gains from the beginning of the monetary union when Germany started to accumulate its trade advantage on the basis of political pressure on labour costs. If this would happen, German products would become 15 to 20 per cent more expensive in France. On such basis a balanced trade between the two countries would once again be possible.

It is, of course, evident that such a course of action is contrary to all EU free trade rules and not realistic. But is it realistic that France will cut its unit labour cost by 15 to 20 per cent in the next years? And what is the alternative? The continuation of German policy at the European level causes stagnation and deflation everywhere (not only within the EU). It leads to the further impoverishment of more and more people in Europe. It makes a real recovery of the European economy impossible. Political radicalization is growing everywhere in Europe. The principle of free trade is not sacrosanct. Even the rules of the WTO allow retaliatory action in the case of dumping. We need to look for solutions that help to prevent the worst. Ultimately, the choice is simple: we are either going to deal with trade imbalances (through tariffs or by other means) or the euro zone will fall apart. The only relevant question is which of the two is the lesser evil.

Germany betrayed the insights of enlightened economics and ignored the core rules for the proper working of a monetary union. There is no reason to let this continue. We need to understand that the rules of free trade are not applicable in a situation wherein a trade partner follows mercantilist policies, creates trade surpluses by means which go against agreements and against economic reason.