"We cannot just send money there." – Shame on you, Mr. Gabriel!

This is the translation of an article that was published May 20, 2015 on flassbeck-economics. We are publishing one article in English every week to allow more readers to follow closely our analysis of global and European events. However, translation is not free and we have to ask for a contribution from our English speaking readers also.

In Germany, we are used to quite a bit from the CDU (the Christian Democratic Party). Not much of anything surprises us any longer. The same is not true of the Social Democratic Party (SPD). The SPD has been mostly silent about the drama that is occurring in Europe in general and in southern Europe in particular. But this has now changed. The president of the SPD, Sigmar Gabriel, warned Greece in terms that one expects to hear from German Finance Minister Schäuble (CDU), but not from a social-democrat. According to Spiegel Online, Gabriel told BILD (the tabloid) that “A third aid package (for Greece) is only possible if the reforms (of the Troika) are being implemented. We cannot just send money there.“ This is, in fact, nothing but grandiose insolence. What is it that you actually want? Let me repeat a question that I dealt with recently: if to reduce wages by 25 per cent is not “reform“ then what is?

Let me once again show the main result of the most important reforms so far. The graph below shows the evolution of real wages per hour in Greece in euro on the right scale (in blue for the demand side (consumers) and in green for the supply side (producer prices)). The evolution of unemployment (in red) is shown on the left scale. The most important requirement from the part of the Great Coalition (the current German government) as well as from the previous German government was that Greece had to increase its competitiveness. In order to achieve this, Greece had to raise its labour market “flexibility.“ The Troika put enormous pressure on Greek wages. This policy had the full support of Germany. The policy proved to be “successful:“ it resulted in a strong absolute decline in real wages. Wages decreased from 15.50 euro in 2009 to 12.70 euro in 2014 on the demand side and even more on the supply side. 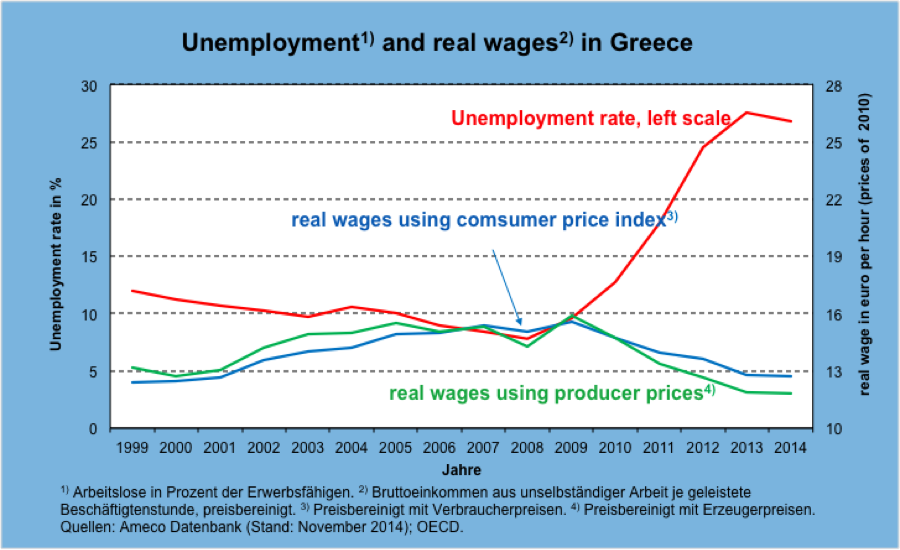 A wage reduction of more than 22 per cent from a consumer perspective (and by more than 30 per cent seen from the employer perspective or the supply side) testifies to nothing if not to tremendous „flexibility“ and a genuine „zeal for reform“ that the hardliners within the Troika advocate with blind passion. The Greek “reforms“ were unmatched, both in scale and in consequence, in any other country in Europe. Now, once again, we are going to tell the country that it must implement further reforms. This shows a complete disrespect for the facts. It betrays incredible moral aloofness and cynicism towards the Greek people who suffered through the hardships of the „reforms.“

The real scandal about all of this is that the „reforms“ accomplished nothing for those who suffered through the ordeal. The „reforms“ disempowered the trade unions, brought “flexibility” into the labour market, led to lower wages and destroyed much of the Greek social fabric. However, it led to exactly the contrary of the what the Troika expected. The result of the „reforms“ has been a complete disaster, something not seen in Europe since the end of the Second World War. Unemployment did not decline, as the Troika expected. Unemployment rose as a result of the „reforms.“ How it is possible, in view of this complete disaster of the policies of the creditors to argue in favour of a continuation of „reforms“ as a prerequisite for further aid? This position is as incomprehensible as it is irresponsible.

When it comes to matter like this, this is exactly where the Waterloo of the Social Democrats comes to mind. It is simple enough. The SPD has by now for years called for wage moderation. They firmly believe in neoclassical notions on the labour markets. After embracing the holy scriptures of neoclassical economics and austerity, the SPD finds itself in a more than difficult situation. It is hard to admit that they are wrong and that the policies of the Troika do not work and cannot work. But the clearly visible results of this policy destroy all the values the Social Democrats still pretend to defend.

But even from the purely political side their position is hard to understand. Is there in the German Social Democracy no longer anyone who recognises the pernicious consequences of Germany lecturing the wrong lessons to Europe? That in German talk shows, almost week after week, incredibly stupid and vulgar nationalist talk dominate when it comes to Greece is already more than bad enough. But that the president of the German Social Democrats borrows the phrase of the biggest ignorant of all is outrageous. It is nothing but a capitulation to populism. It shows the hypocrisy that the Social Democrats feign when they ask for solidarity with Greece. The truth is that we brought a country to the brink of economic disaster. Those who do not even want to try to understand what the Greek people went through and why and how should at this point refrain from making further recommendations.

In addition to all this, the point that Mr Gabriel makes about “just sending money there” is wrong. There is, of course, also the carousel of the „aid“ to Greece. Money is being sent and then it is sent back immediately. So far, the teachers, the nurses, the industrial workers, the farmers, the unemployed, the disabled, the sick and the pensioners have seen nothing of the „aid“ that has been given to Greece. It had almost no other effect than to save its creditors. The money that the Greek government manages to scrape together also ends up in the accounts of the creditors because the creditors are unwilling to allow for a reasonable agreement. But austerity or nothing is the silly motto of the Troika.

To make myself as clear as possible: in view of the German (red and green) responsibility for the gigantic misery that the euro caused and the pitiful failures of the Troika policies during the last five years, the only action that would actually make sense and be just is exactly the one that Gabriel categorically rejects. Very cheap loans should be made available to the Greeks without any further conditions – no austerity, no further wage moderation, no further flexibilization of the labour market, no further privatisations. The Troika has to give up on its absurd conditionality. The Greek government must be given space to breathe. The Greeks deserve economic recovery as well as dignity and justice.

If Greece becomes de facto ungovernable in the near future the hardliners within the German government are to blame. They decided to set an example and defend their economic dogmas and failed policies against all fact and all reason. They may well become the gravediggers of Europe.

Translation by Will Denayer.